It's a common response to the question "How much did you drink" - "2 beers".  Often by a patient that can't stand without support, let alone walk straight. 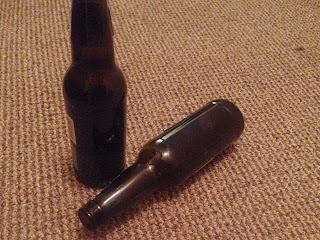 I've been legally consuming alcoholic beverages for the better part of a decade. I know what drinking 2 beers does to the average person. They might be more likely to try (and fail) at Karaoke. They might even say something stupid they'll regret later. If they don't hydrate appropriately, they might wake up with a headache. They are unlikely to be so intoxicated that an ambulance is called for them.

After 14 years in EMS, I'm convinced that anyone who tells me they "only had 2 beers" is lying. Why? I'm still trying to figure that out.

Anyway - the other day I discovered something new. I had an obviously intoxicated Hispanic patient in my ambualnce. Though my minimal Spanish, I asked "cuántas cervezas?" The response I got? A toothy grin, coupled with the patient holding out 2 fingers and saying "dos".

Now in addition to the fact that SumDood is on a world tour, it appears that '2 beers' is a universal concept.
Posted by Jon at 13:56