As some of you know, I'm involved with NAEMT's legislative advocacy efforts on behalf of EMS. Yesterday, I spent the day walking the halls of the Capitol offices meeting with some of the Commonwealth's legislative contingent - mostly their staffers, but I did get to meet one Representative. This was the 5th EMS On The Hill day, and the 4th one I've attended.

This year, our "asks" were actually pretty simple. On the Senate side, we met with the staff of Senator Toomey and Senator Casey (separately). We were primary talking about H.R. 1791, The Medical Preparedness Allowable Use Act. This bill passed the House in February, and it currently sits in committee in the Senate. It's a pretty simple bill - allows an expansion of approved expenses for the Urban Area Security Initiative grant money to fund chemical/biological countermeasure stockpiles. The money is already there, this just means it can be spent on some more things that could be useful. In the Senate, we also talked about the Field EMS bill, even though there is no companion Senate bill yet. Finally, we asked for the Senators to consider joining the EMS Caucus.

After leaving our first meeting on the Senate side, we were able to get an escort by an intern from Senator Casey's office, so we were able to make our meetings on the House side without rushing too much. We got to walk along next to the Senate Subway tracks (We didn't wait for a subway car for the trip. Pretty cool tour! 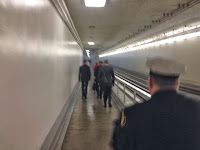 On the House side, we didn't have to talk about H.R. 1791, because it's already passed. Instead, we focused on talking about the "Field EMS Bill" - Officlally: H.R.809 - Field EMS Quality, Innovation, and Cost Effectiveness Improvements Act of 2013. The Field EMS Bill isn't perfect - but it gets us talking about quite a few things, and at least gets us a seat at the table. If you've got a better idea, I'm sure NAEMT would LOVE to hear it... but right now, this is their best one.

We also talked about the EMS Caucus. Although there's a Congressional Fire Service Caucus, there's no group focused on EMS - yet EMS calls for service are often 5:1 fire calls.

I think the easiest sell with that was Congressman Glenn "GT" Thompson from central PA (PA-5). We walked in to the office as the House Bells were sounding, calling representatives to the floor for a vote. His staff explained that the Representative was being called away for a vote, but "He has 5 minutes and wants to see you." He greeted us with "It's good to see fellow EMS personnel here". Turns out, he's been an EMT and Firefighter since the mid-1980's, and still serves when he's home.

Here's a screenshot of a tweet HE sent with our group photo: 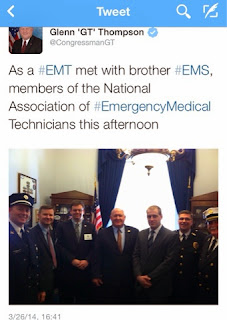 Congressman Thompson's staff said that the Representative has apparently stopped at a few car crashes in rural Pennsylvania since being elected and provided initial first aid until EMS arrived, so heads up, Central PA folks - that gentleman who says he's a firefighter and stopped to help might also be your Congressman!

Anyway - I think it was a relatively successful day. Last picture before I sign off - This is Chief Touchstone from Philadelphia FD EMS (and NEMSMA), with his Congressman, Rep. Chaka Fattah (PA-2). 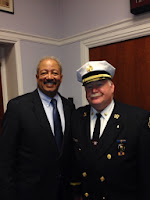