The other night, I was on with the Campus First Responder squad, and I got toned out at 3am for an “alcohol evaluation” – that’s Campus PD code for “come look at this drunk and try to talk them into going to the hospital.”
As I rub sleep out of my eyes, I go to the truck, driveacross campus, and meet up with campus PD. The call is in a vending area off ofthe lobby of a residence hall. I get a brief story from Campus PD – turns out,this guy came downstairs to the lobby, walked over to the vending area, andthen passed out. PD found him lying in a pile of quarters, out cold in front ofthe Coke machine.
So I work my way though the assessment. I ask him what hehad to drink tonight. At first, he gives me the ubiquitous answer “Two Beers”,but I press on, and ask again – “What did you have to drink?” So he starts:  “I had a Skittles. And a Reese’s, and a 3Musketeers…” I look over at the snack machine the patient is facing. Sure enough, I see he’s reading off the row of candy. Then he finishes off “… then I had a Fritos.” I look at the cop, and he looks at me. Both of us are trying to keep a straight face, and failing.
In the end, he signed a refusal (Press Hard, Making Two Copies), and I went back to bed, but not before I talked with the cop. Turnsout both of us had the same train of thought… we’d heard of a Skittles shot,and a Reese’s shot seemed logical… then we both noticed the vending machine,and realized he was demonstrating he could read candy bar names right as he gave the punch line: “…then I had a Fritos.”
And people wonder why I volunteer on the college campus.Not only is it a chance to take a break from ALS CCT and keep my BLS skills sharp, but sometimes the patients say the darndest things. 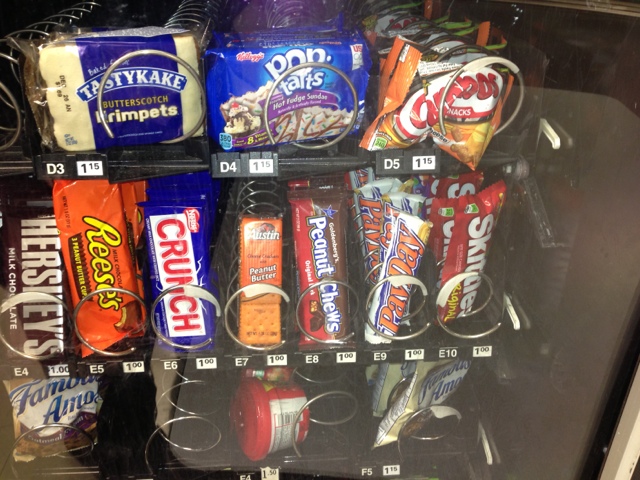